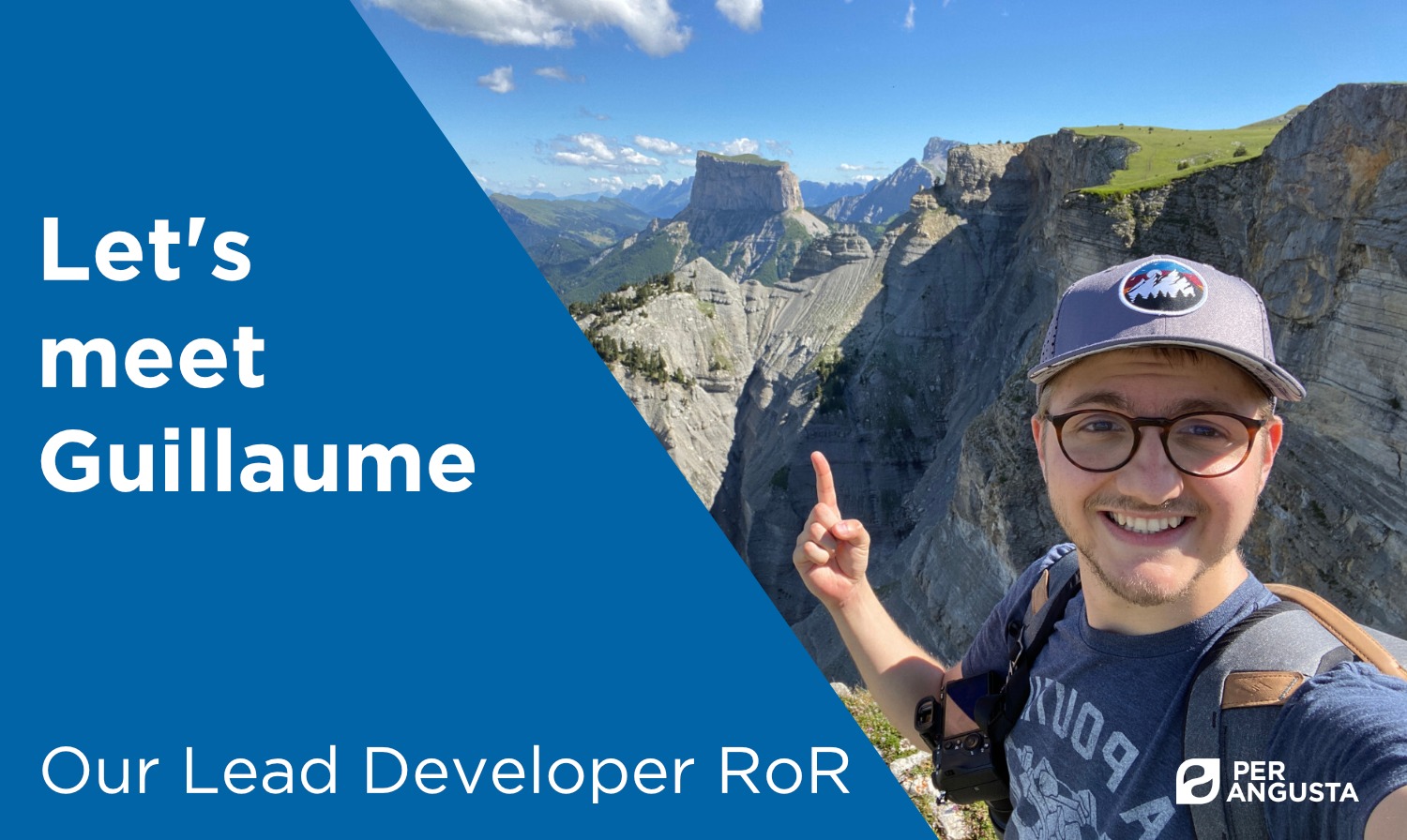 The goal of these articles is to introduce the members of our team.
Here is Guillaume Briday, Full Stack Developer Ruby on Rails at Per Angusta!

If you were a dish?
Cheese board, because cheese is life.

A destination?
United States, for its national parks and big cities. Been there many times, but I would like to live there one day.

A famous character?
Casey Neistat. Definitely one of the most important people in my life and someone I haven’t had the chance to meet yet. He inspires me every day and has changed my mindset forever. I wouldn’t be me today if it weren’t for him and Steve Jobs, for sure.

A tool? 🛠
My bagpack. I can easily carry all the important stuff I need to travel around the world or to enjoy my life on a computer.

What’s your last impulse purchase?
Definitely my van. In 2020, I bought a van to live inside, so I could meet new people and visit new landscapes.

I have always been a web developer. Before Per Angusta, I worked in web agencies building MVPs and showcase applications. I joined my first web agency, Ochelys, back in 2015 when I was in Engineering School. I discovered real-world applications development with Laravel and Rails. After that, I joined Studio HB where I really focused on Rails development to build most of my MVPs and some showcase applications. I was Lead Developer and a DevOps Engineer, working to develop and deploy our customers’ applications. In parallel, I worked a lot as an open-source contributor on Rails and many other projects.

I joined the Per Angusta team as Lead Developer. My role is to explain the technical business requirements to the team. I also ensure that all developers have the best tools they need to meet the high expectations we have set for our customers. I am mostly working on the performance of the overall architecture, application maintenance, and testing the application on both the back and front end.

In order to dive into the application, I started to reorganize some files in the app and clean up some parts of the code. I also added some tools to monitor the health of the code to prepare for future features.

Alongside my dev projects, I also work with Frantisek and Marine to manage the tech team. We reorganized the team’s workflow and examined our roadmap.

I wanted to see something new and, moreover, to work with great people. I have known about Per Angusta for more than three years now, and I thought it was the right time to join the team.

I learned about Per Angusta before joining thanks to the Ruby’s community and their MeetUps. This is where I met Jean Michel. I have always wanted to expand my horizons. Given that Per Angusta was growing fast and I already liked the tech team, I thought it was a good time to join and undertake some new challenges. I quickly realized that the whole team is poised for great things and that they are all passionate about what they do.

On a professional note, I am proud that I joined the Ruby on Rails community and that I am now a principal contributor. Hence, I help making technical choices in the open platform. I’m also a co-organizer of the Ruby community events in Lyon.

On a personal level, I’m proud of undertaking two major solo trips without any help or even knowing the local language. I highly recommend doing this to step out of your comfort zone in a very drastic way. It’s life changing.