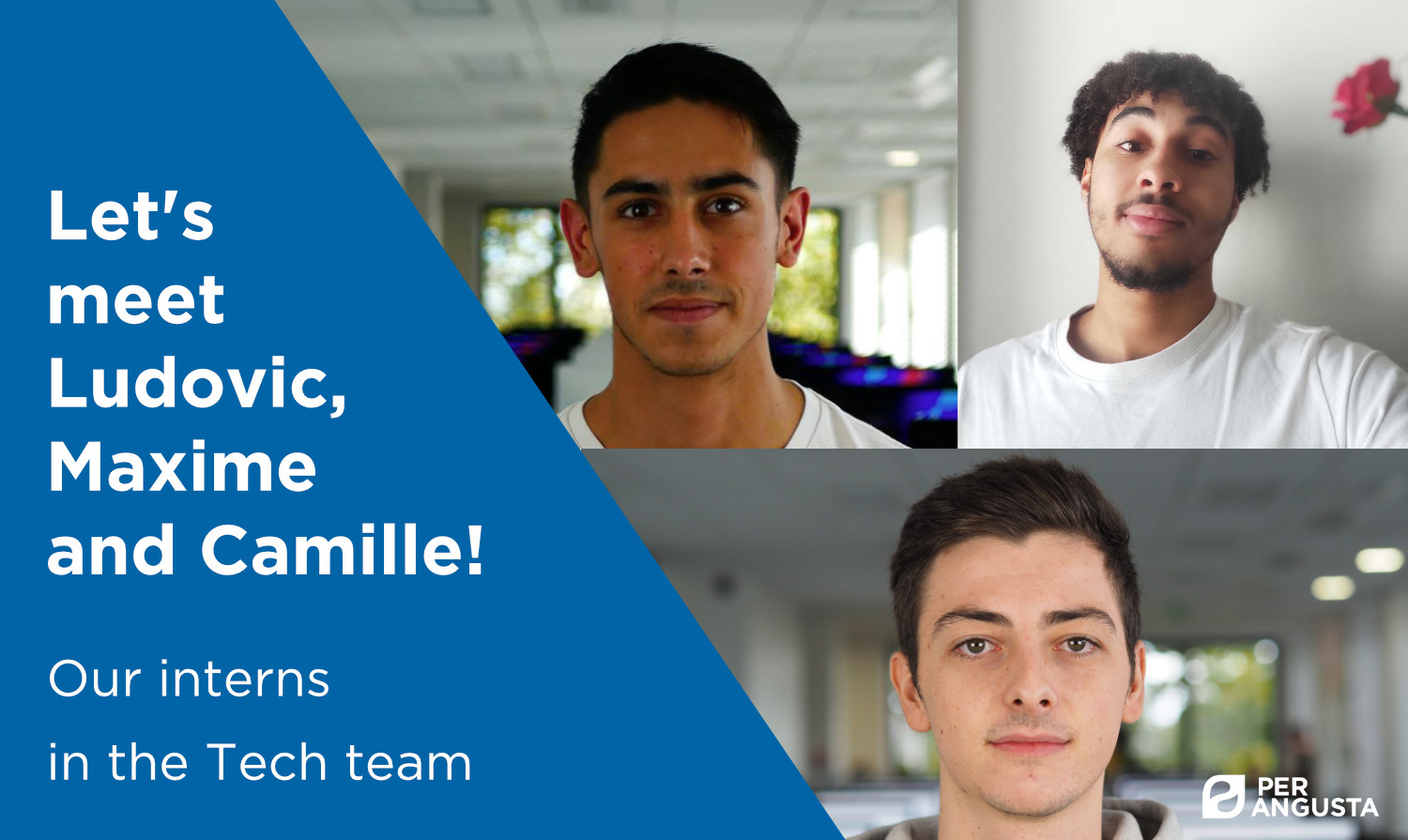 The goal of these articles is to introduce the members of our team.
Here are Ludovic Brun, Maxime Same-Kotte and Camille Alin who spent 6 month as interns in the Tech team at Per Angusta!
Their insternships ending soon, we wanted to introduce these great guys!

If you were a character?

Camille: Tyrion Lannister! One of my favorite characters in Game of Thrones and also one of the smartest.

Ludovic: I may disappoint people, (Pierre in particular ;), but I think that the french rapper Jul suits me well! I love that he wants to unify people. For me, that’s a precious trait! He manages to bring people together and I think that’s very nice. I also really like his humility, which is something I wish more people had. Moreover, I find his keen sense of work to be commendable.

Maxime: Stringer Bell! A character from The Wire, Barack Obama’s favorite series. He perfectly embodies the will to succeed in life regardless of circumstances. Respect, charisma, intelligence, what else could you ask for?

Your most proud accomplishment during your internship?

Camille: I enjoyed absolutely everything I did during my internship, without exception. It’s so satisfying to end a project on such a large application and to know that the functionality I just finished is going to be used by our customers.
But if I really have to mention something in particular, I would say it’s the redesign of a big part of the application’s planning because it’s the biggest project I’ve ever worked on. It was a great collaborative experience, working with several team members, including my faithful internship colleague, Ludovic Brun!

Ludovic: It’s silly to say, but for me, the simple fact of contributing to improving the application makes me extremely proud! I’m particularly happy with the first real project I was able to carry out, which consisted of improving the message system in the app which I made with another trainee from my school, Camille Alin!

Maxime : I enjoyed every project, but the one that I care most about is setting up translation groups because on this particular mission, I participated in every step it took to create this feature: retrieving information, presentation, code, finalization. Moreover, I really felt that this addition would be of great use for the team, which made me happy.

Why would you recommend Per Angusta to other interns?

Camille: I would definitely recommend Per Angusta to any trainee who is interested in web applications. It is also a company that has managed to integrate a lot of good work practices. It’s been very beneficial to learn more about and something I will use in the future. The diversity of projects keeps things interesting and you’re always learning new things.

And of course, you would get the opportunity to meet and collaborate with Per Angusta’s team, which is really at the TOP!

Ludovic: Our internship tutor, Jean-Michel Gigault, comes from the best programming school in the world A.K.A 42, just like Camille and myself in fact! And above all, because Per Angusta knows how to nurture its trainees, offering them challenging missions and helping them grow as web developers. By the way, thanks again for everything!

Maxime: I would recommend Per Angusta because the working environment is really positive. It allows interns to learn without feeling lost. The team welcomes new arrivals, making them feel at home. To anyone interested in the web and, especially Ruby, I suggest you work at Per Angusta This is a great company.

What are your future plans?

Ludovic : I’m going to continue my training as a developer at 42 Lyon. I plan to launch an electronics club soon to allow students to discover this incredible world of SaaS which for me is perfectly complementary to the code!

Maxime : Continue my training at Epitech in order to become as versatile as possible and as competitive in the fields that interest me as I can. So who knows? Maybe I’ll start my own business someday.

Camille : Continue to build up my skills and experience so that I can carry out a personal project. In the meantime, I’d like to join a team as good as this one where I can grow, put my knowledge and experience to use, and discover more challenging and interesting projects.

Find out more or adjust your settings.