The goal of these articles is to introduce the members of our team. Here is Santiago Hernández, Business Analyst at Per Angusta! Let’s start with a quick Chinese portrait! If you were a dish?Definitly  an Ajiaco Santafereño. It is a… 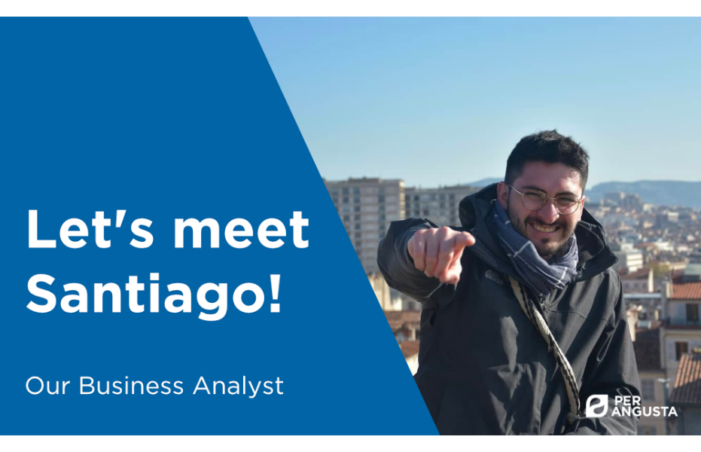 The goal of these articles is to introduce the members of our team. Here is Santiago Hernández, Business Analyst at Per Angusta!

If you were a dish?
Definitly  an Ajiaco Santafereño. It is a typical dish from Bogotá and it is all you need to live 2700 meters closer to the stars (yes, thats the altitude of Bogota). It’s a chicken soup that comes with several types of potatoes (criolla, pastusa, and sabanera). Given that Colombia has more than 850 varieties of potato, it’s the perfect dish!. Ajiaco Santafereño is served with cream, capers, and a plate of rice with avocado, generally in clay bowls. It is a sample of the “Métissage” in Colombia, since it was originally an indigenous dish adapted by the Spanish.

A destination?
Santamarta in Colombia is a city similar to Nice, where the mountains meet the sea. I am a mountain kind of guy and after spending a lot of time in the city, I have gained a deep affection for the sea. In Santamarta, there is a sacred place for the Arawak (an indigenous tribe in Colombia) which is called Ciudad Perdida. In their cosmology, this place is the center of the universe and definitly the most amazing place I have ever been.

A famous character?
Hard question, but definetly Pepe Mujica, the former president of  Uruguay. He was part of a former guerrilla of the Tupamaros and was tortured and imprisoned for 14 years during the military dictatorship in the 1970s and 1980s. He was called the poorest president in the world, but he is a prime example of the coherence between ideology and practice.

A tool?
A traditional Italian coffee machine called Moka and it has to be the Bialetti. I love coffee and my family in Colombia are coffee producers—so for me, it’s a social ritual ☕️

What’s your last impulse purchase?
It was actually a lot of ice cream from Picardi. My girlfriend had her wisdom teeth removed and it was the first time I entered a frozen stuff shop. I just wanted to provide options for her during the healing process. But it was a bit to much and we still have ice cream in the fridge.

I was living in Paris, working in the retail sector for a luxury store name Suitsupply. I never thought I would end up in France doing that kind of work. Back in Colombia, I was working in the implementation of productive processes with Indigenous communities and taking part in humanitarian efforts.

What is your current role within the Sales Team?

I am a business analyst on the sales team. I support the business department with capitalization of information and lead research of strategic decision makers or clients. Also, I am hoping to contribute to business development by illustrating the importance of a leading ecosystem with worldwide consulting firms, partners, editors, and data providers through financial projections in Per Angusta.

I am proud of my recent project where I was involved in understanding and optimizing our contracts database. It was one of my first tasks with Per Angusta, but I think it has been very useful for the company. It also gave me the opportunity to learn more about Per Angusta and its customer ecosystem. I am really proud  of the recent production of customer lists for the sales teams and I’m looking forward to seeing how the long lists turn into new customers!

I arrived in Lyon a little bit out of sorts. I started my Masters in humanitarian action at the Ecole 3A. During my search, I stumbled upon Per Angusta’s proposal. I found it very interesting even though I had never worked in a SaaS before. In that moment, I found myself asking, why not? I like to try new things and be outside of my comfort zone.

Come on, you can tell us … 😉 what’s your hidden talent?

I’m a very active person! I love climbing and cycling. I currently take part in a percussion group of Afro Latin rhythms that really has potential. I am also particularly proud to have worked in humanitarian action with indigenous communities.

Have a question or would like to schedule a demo?

Our experts will get back to you within 24 hours.