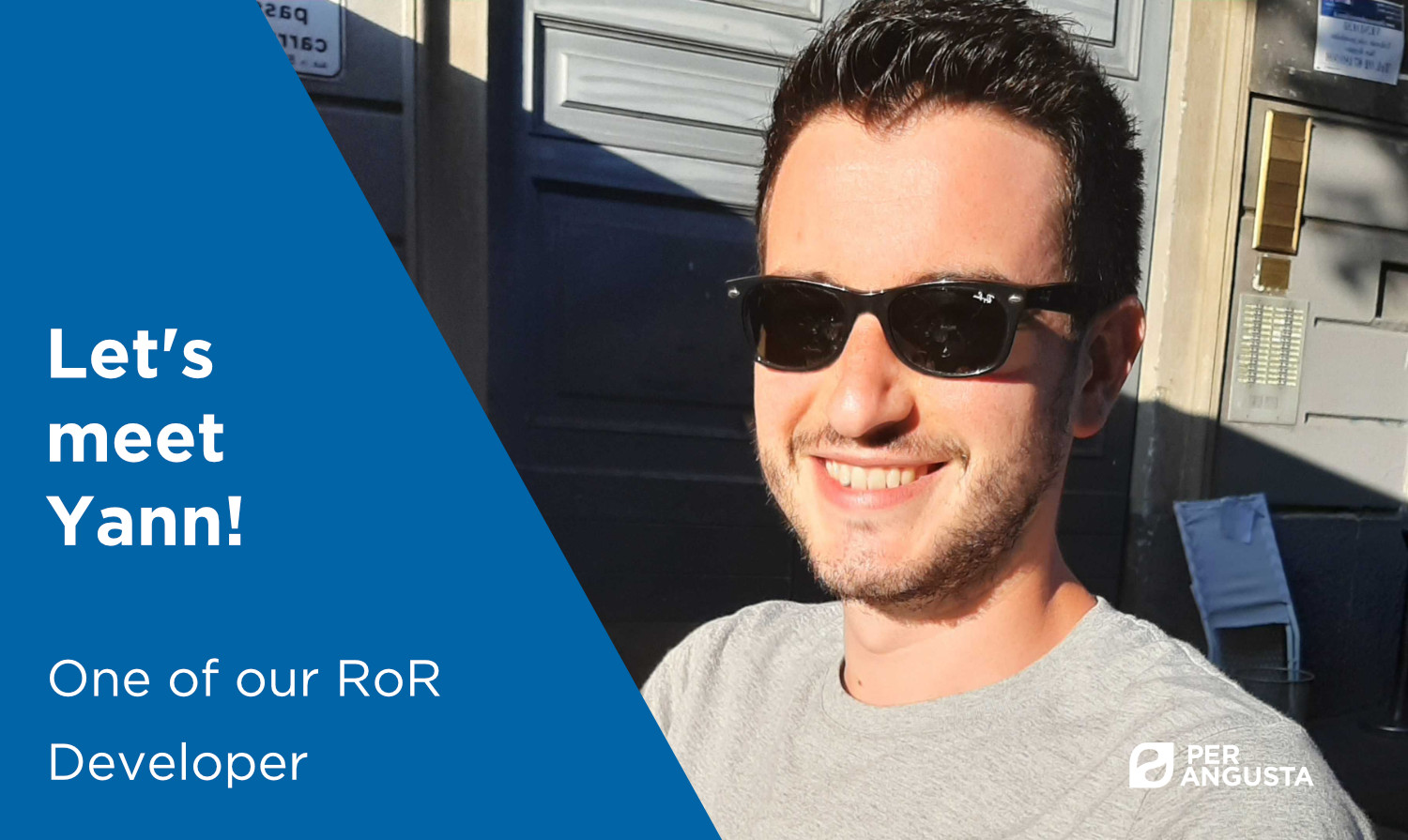 The goal of these articles is to introduce the members of our team.
Here is Yann Legendre, Ruby on Rails developer at Per Angusta!

If you were a dish?
A nice classic pizza, because even after eating hundreds of them, I just never get tired. 🍕

A destination?
Canada! I have been hearing about it for years, how awesome it is and how happy I would be there, but I haven’t had a chance to go there yet, soon, I hope! 🇨🇦

A famous character?
Zidane, he is a great champion who won everything he could, and who knew humility and did not have to make a lot of noise on every media to exist.

A tool? 🛠
A guitar, I am really passionate about it! I practice every day, even if it is a lot of work, I really enjoy it.

What’s your last impulse purchase?
A guitar of course! I recently bought a classic american Fender Stratocaster, a fantastic typical sound, and a great way to decorate my living room 😊.
I could also mention noise-cancelling headphones. Apparently, I give a lot of importance to sound quality (and overpriced musical equipment)!

I completely switched careers last year. I studied engineering and work in supply chain, mostly for the FMCG industry. I used to be a supply planner for soft drinks bottling plants (Pepsico), stationery (BIC), or meat (Aoste). I sometimes worked on custom automation IT tools, and it is probably where I started to have an intereset for programming. Then I started changing jobs with a 2-months web programming bootcamp (Le Wagon) in Lyon during the summer, and then co-founded a startup to sell intelligent lockers. Now I work for Per Angusta, it’s been 6 months, and it’s great 😊

I am a web developer for Per Angusta application. I handle mostly backend issues, so mostly the logical and more structuring aspects of the application. Like the other developers, I help maintain the application, implement new features, or enhance existing ones. I also create ‘specs’ that are used to test automatically our codebase everytime someone adds or removes something from the application.

For a new developer, Per Angusta is quite wide, with a lot of complex content. Each new feature I work on is a challenge, and I am always proud to see something I created myself end up online and be used by our customers.

I always used to work for large companies, sometimes with heavy processes, difficulties to communicate efficiently across different teams. Being pragmatic, I wanted to avoid organizations where responsibilites might be too restrictive, or worse, with contradictory objectives between teams that should work towards the same goals, sometimes creating absurd situations. I chose Per Angusta because it is at the same time “small-sized” considering where I used to work, but also successful and respected by its client. I really feel good with the team 😊

On a technical standpoint, it is a great way to learn from experienced developers, that are not afraid to give a chance to newcomers ! The application uses Ruby on Rails, the language/framework I used to learn coding, which makes it pretty confortable to start in the best conditions. I also wanted to start working on a single product, to focus on it, but also to try to master a wider, complex and demanding technical environment, rather than gaining experience from smaller projects that could be less challenging.

I know how to do accents from a lot of different regions and countries, and the voice of Chewbacca from Starwars. I also played baseball for a few years 😊